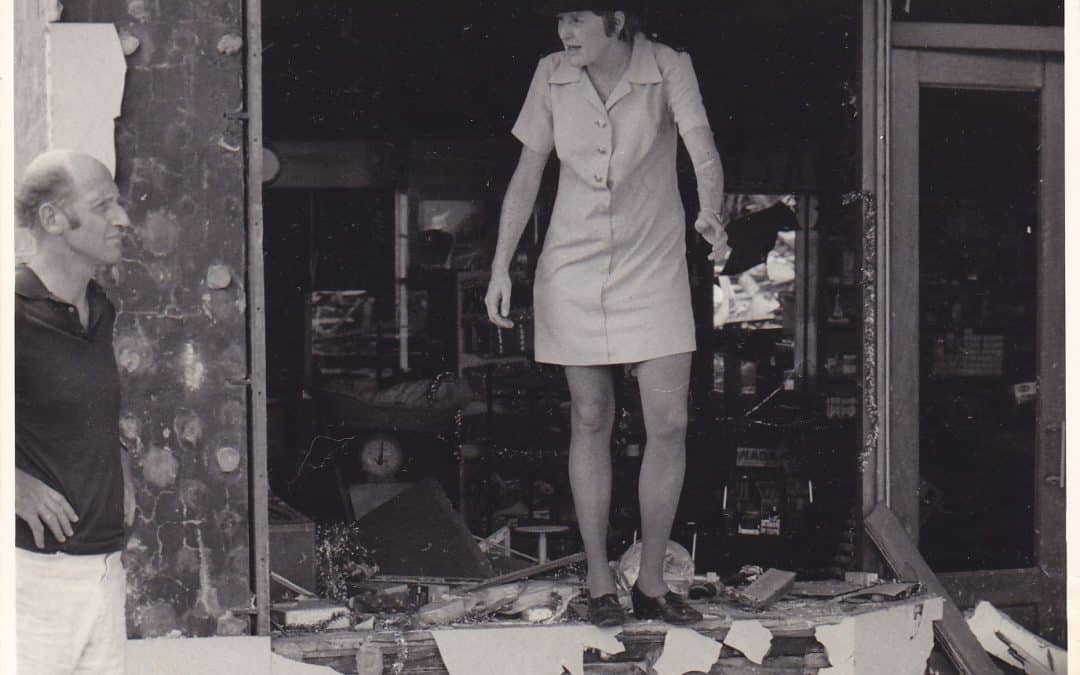 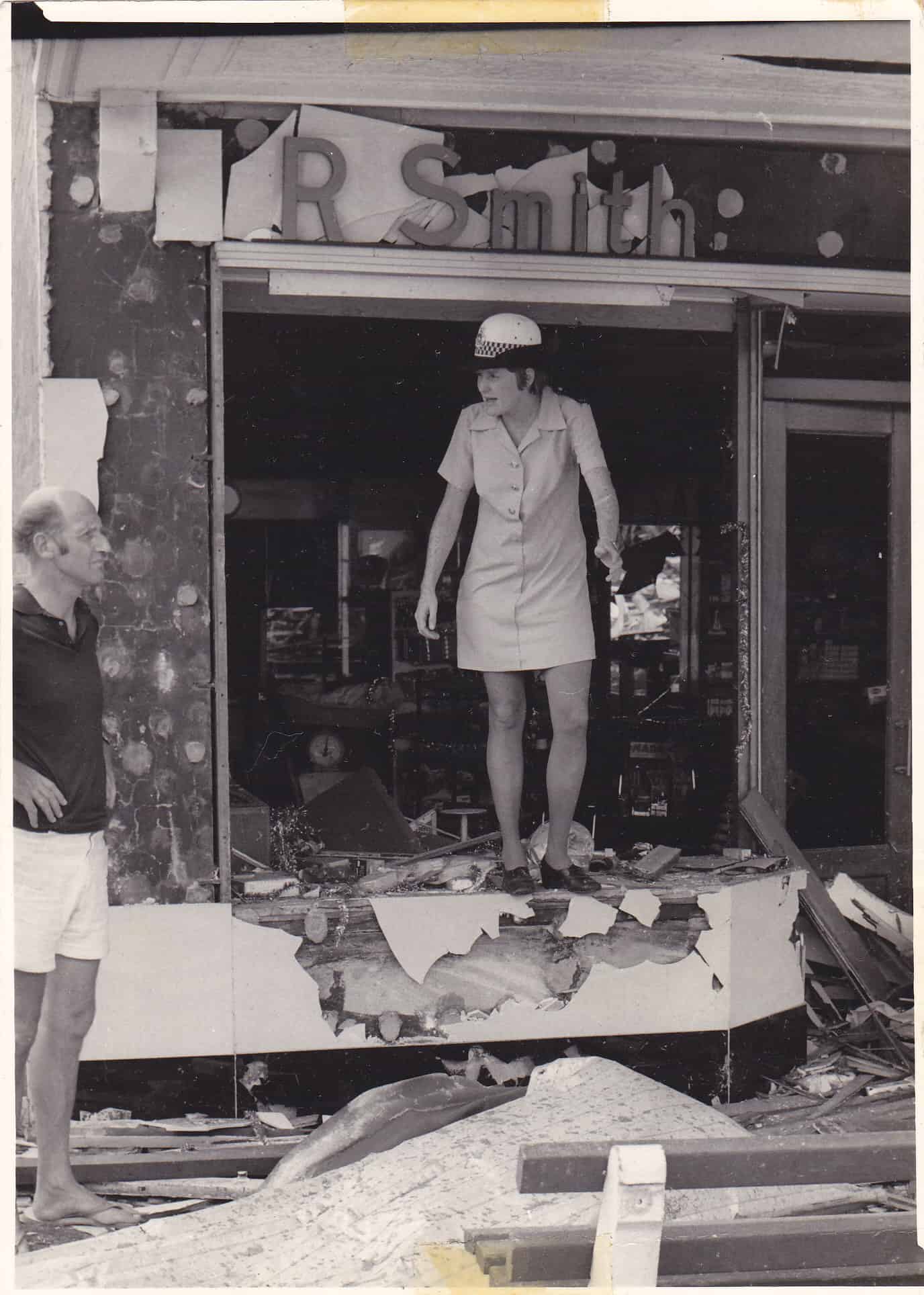 Jill Bolen has a dignified, imposing presence. She’s broad-shouldered, square jawed with a helmet of white hair.  She … speaks with a broad, working class accent. Raised in Cairns by a wharfie father, and a homemaker mother, both parents had a strong commitment to social justice and a left wing view of the world. They were pacifists; “Behind every bayonet is a worker,” her father would say. As the youngest child, her father would take her to the union meetings. She came out to her parents in her early days as a lesbian and was always completely accepted by them and her siblings. Later, when she was living with her partner and her mother came to stay, “Mum would always bring us both a cup of tea in bed in the mornings.”

In her 20s, she remembers going to the CAMP club in the Brisbane CBD. “At that time, the police would park opposite the CAMP Club, and when they raided the Club premises, many of us would step out of the windows onto the awning.” Where that club once sat, the Supreme and District Courts now stand. Jill grins when she considers the irony of this.

Jill forged many strong friendships at the time and knew firsthand about the effects of police harassment.

“Many LGBTI folk had experienced much harassment by police, and also, they had been sacked from their jobs when their sexuality became known in the workplace. It was then I realised that life was not as carefree for our Community as for many other sub-groups within society. In Queensland, most of the venues we attended at that time included both lesbians and gays as their patrons. It was a time when, for work purposes, many a lesbian would take a gay man (and vice versa) to special events to avoid being outed. The threat of losing one’s job, because of one’s sexuality, was real.  It was not something just imagined.” She joined the Queensland Police in 1973, and socialised discretely with her lesbian and gay friends, or so she thought.

In the 1970s, women couldn’t get a loan in their own right. They needed their husband or father to be a guarantor. “Despite the hurdles of single females obtaining finance for a house, I had managed to purchase a house in an outer suburb.” By late 1977, she was living in that home with her partner who was also a policewoman. “Life was good, but things were soon to take a turn for the worse.”

“I was at the Brisbane Coroner’s Court waiting to give evidence when my partner came out of the lift looking quite stunned. I asked what was wrong because things were fine when we had breakfast and left for work that morning. She had been called in to the head of the Criminal Investigation Branch and was interviewed about our relationship. The interviewer asked her if she was in a lesbian relationship with me. She admitted she was. Various questions were asked which indicated they knew of our socialisation and activities. She was also asked if her family knew of this situation. She was then told to come to the Court and bring me for interview when I had finished.”

“After giving evidence and, on arrival at the CIB Headquarters, I made calls to some other lesbians in the police. I explained what was happening and recommended they not attend without a lawyer. I was then interviewed, and readily admitted my sexuality, and said that it had nothing to do with my job. I asserted that I was more competent and capable than some of my heterosexual, male counterparts…. At this stage, the Inspector taking notes of the interview asked me how to spell heterosexual. The interviewer walked out of the room; I think he went out to laugh.”

“Despite my requests not to, my partner ended up resigning from the job; she had been the dux of her squad and was training as a scenes of crime officer.” Jill considers her partner’s resignation as a great loss to the Force. They eventually broke up. This was, of course, the unstated aim of the Lesbian Investigation.

Soon after they’d been informed about their transfers, Jill and her partner were at a family barbeque, talking with her sister and brother-in-law who were very supportive. He joked that he thought the Police hierarchy’s aim to root lesbians out of the force would probably have the reverse effect.

“If they transferred one lesbian to Cairns and one to Coolangatta, the women wouldn’t change their sexuality but merely find another partner if their relationship broke down. If those two found a new partner in the police then… those four women would be transferred elsewhere.” They laughed as they imagined the exponential spread of lesbians throughout country QLD and the Force. “I went to see the Deputy Commissioner shortly after that visit, and explained my brother-in-law’s scenario, having lesbians in every station. Stunned, his reply was, “Jill we didn’t think of that.”

Jill’s rise through the ranks of the Police Force attests to a high degree of resilience. She acknowledges that, “The interpersonal events at work sometimes caused me severe angst. In 1990 I was promoted to Inspector and posted to the South Eastern Regional Office at the Gold Coast. While the two most senior officers in the Region were extremely supportive of me, some of my colleagues weren’t. I had five qualities that they saw as very negative. I was a woman, the most junior in terms of years of service, a lesbian, the youngest in age, and the only commissioned officer with a tertiary education.”

Highlights of her career include introducing the application of the Domestic Violence legislation to Queensland that better protected battered women. She helped to change the culture within the Police Force that had seen “a domestic” as an assault that was somehow less worthy of prosecution. She educated officers of all ranks, some magistrates, lawyers, domestic violence refuge staff and some health care staff.

After her retirement, Jill had some happy and challenging years working on an AusAID project in Papua New Guinea, assisting their Constabulary in Community Policing ideas and methods. Her partner joined her on her second stint in PNG, but on their return to Australia in 2008 Lorna “was diagnosed with Stage IV lung cancer. We were open with regard to our relationship with all medical staff involved, particularly in the Palliative Care ward at St. Vincent’s Hospital Brisbane – a Catholic hospital.  Jill realised how much attitudes towards lesbians had changed and how there are kind, warm-hearted people everywhere. The nurse on the night shift when my partner was in palliative care, two nights before she died, said to me, “Jill, if it was my partner, I would want to hop into bed and have a cuddle. Come on we’ll tuck you in.”  That happened the last two nights of Lorna’s life; I appreciated their love and concern – for both of us.”

The powerful contrast between this strong, butch, resilient woman who had withstood so much in Joh Bjelke-Petersen’s Queensland, and seeing her soft side, being tucked into bed next to her beloved, dying partner, brought [us] to tears.