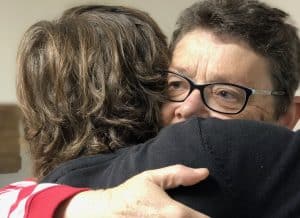 A series of narrative based resources and a guide in LGBTI inclusive services for people living with dementia has been developed:

Pulse of My Heart

Pulse of my Heart, or ‘A chuisle mo chroi’, is an Irish Gaelic expression meaning ‘my darling, my love’. It  involves an annual film documenting the importance of love in the life of Edie Mayhew and her partner Anne Tudor. Edie was diagnosed with younger onset dementia in 2015. Header photo (c) Lisa White, The Social Photographer.

Our 2017 film has been made and is very, very beautiful. The film was shot at the Circle of Love celebration of Edie and Anne’s 33 years together – which happened during the Marriage Equality postal vote in Australia.

This second film was our first with professional film maker Andy Ferguson. Between this and the previous film Edie has needed more support from Anne – and so we decided to include both Edie and Anne in the film. In preparation for the film Edie and Anne were invited to write each other a letter about love every day for a week – and then to open and read them on film. The letter writing approach provided structure and opened up the possibilities. This film led to an international campaign called: Letters of Love and Dementia.
http://www.youtube.com/watch?v=0eUQNDGFlcM

This first film is a series of photographs and a sound track produced by Catherine Barrett as part of a project documenting the experiences of LGBTI people living with dementia.
http://www.youtube.com/watch?v=LGFUQhCkT6U